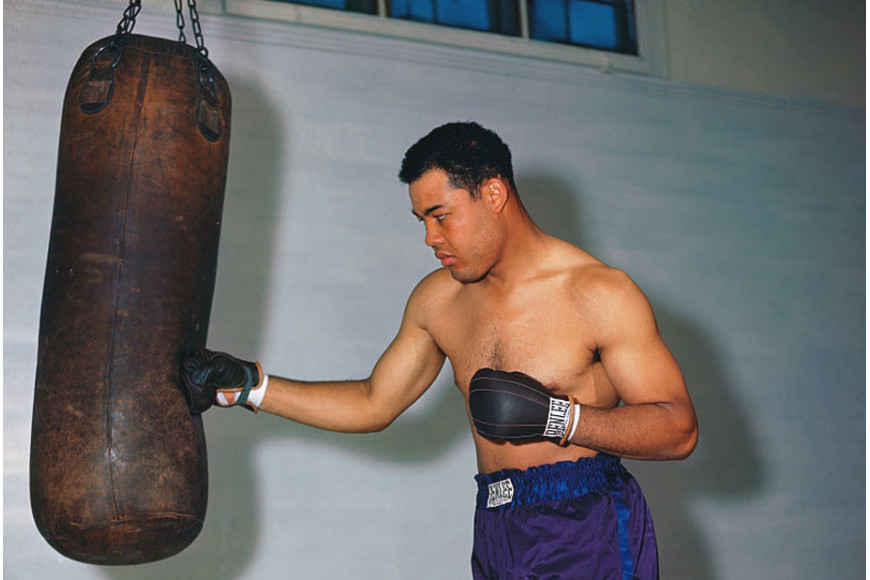 World heavyweight champion for 11 years and 8 months with only 3 defeats in 72 fights, Joe Louis is one of the greatest boxers in history but also an iconic personality because of his famous political fights in the 1930s.

Born in LaFayette on May 13, 1914 to parents of European, African-American and Cherokee Indian descent, Joseph Louis Barrow grew up under the harassment of rural America in Alabama before his family moved to "Black Bottom", the ghetto Black today demolished from Detroit which will be born a few decades later the Motown and from which was also originated Sugar Ray Robinson. With an imposing stature for his age, Joe typed hard in the punching bag and boxed off his livelihood at Ford's assembly line until becoming a professional in 1934. After a series of victories by knockout more than convincing, a in 1935, a fight that will change the course of his career and propel him to the rank of star. He meets at Preston Carnera's Yankee Stadium in New York, the Italian boxer-wrestler giant with the false airs of Richard Kiel, the "villain" of James Bond, but also and especially colt of Benito Mussolini's regime. As the World War II approached, the clash took on an extra-sporting international dimension. Louis wins by KO in the 6th recovery after violent exchanges on both sides. The press seizes the phenomenon, the "Brown Bomber" was born. Growing number one world heavyweight champion, Joe will challenge Third Reich propaganda champion Max Schmeling for a new symbolic battle between the powers of the approaching world conflict. In a series of strokes and left hooks, the German sends Louis to the carpet, who loses for the first time in his career in pros, by knockout. Waiting for a revenge that obsessed him, he seized 23 years of the supreme title June 22, 1937 at Comiskey Park in Chicago by beating his compatriot James J. Braddock, who had to postpone his fight with Schmeling. The second duel against the German boxer takes place a year to the day after the conquest of the title against Braddock, in a Yankee Stadium heated white and hostile to the former world champion who has publicly disavowed the Hitlerite cause. This time it will only take 2 minutes for the "Brown Bomber" to defeat Schmeling, who will later become a close friend.

It is at the top that Joe Louis leaves to serve under the colors of Uncle Sam as sergeant during the Second World War, participating in a hundred fights exhibitions to support the morale of the troops in Europe, accompanied by the "Greatest" Sugar Ray Robinson. Then he returns to the country to defend his title several times, until 1950 and a defeat against Ezzard Charles. Rocky Marciano will inflict a third failure a year later. Designated boxer of the century in 1981 after 57 victories by KO in 72 fights, Mohammed Ali will admit that Louis has always been his idol. He stays like Jesse Owens, a sports icon of the 1930s.