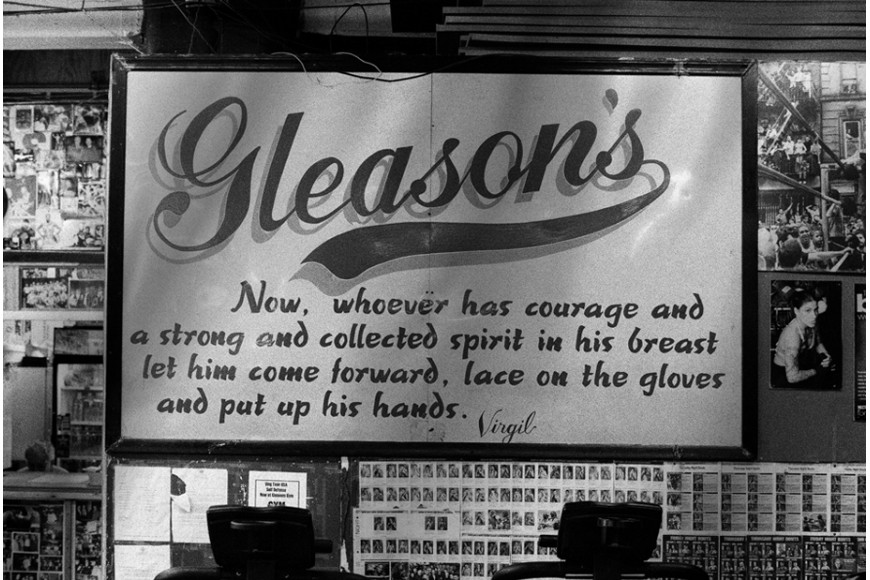 Frequented by big names in boxing in the 1940-50s, most famous at the time, Jake LaMotta, and especially by the legend Mohamed Ali a few years later before his first fight against Sonny Liston, Gleason's is today an iconic boxing club in New York, sublimated by Hollywood and the advertising industry that brought it into popular culture.

During the 1920s and the period of prosperity that followed the First World War, the Italo-Americans were victims at the time of significant discrimination on the background of Prohibition and fierce competition between immigrant communities in a United States dominated by Anglo-Saxon, Peter Robert Gagliardi is one of those hundreds of boxers of Italian origin who adopt a surname with Irish consonance to try to make a career and develop their business. The native of Popoli in Abruzzo, now "Bobby Gleason", a flyweight and bantamweight boxer, opened a small room in the South Bronx at 434 Westchester Avenue in 1937.

In its early days, the Gleason Gym is a dilapidated, old industrial warehouse that still smells of coal, equipped with four punch bags, six speed pear racks and a few bleachers to watch the fights. But he quickly refueled and developed the pace of the titles acquired by the champions he produced: Mike Belloise, world champion featherweight NYSAC (1936-1937), Phil Terranova, world champion featherweight NBA (1943- 1944), Jake LaMotta, the "Raging Bull" World Middleweight Champion (1949-1951), and Jimmy Carter, World Lightweight Champion (1951-1952, 1952-1954, 1954-1955). Driven by its reputation, the gymnasium attracts the young Cassius Clay, who is not yet Mohamed Ali at the time, and who is preparing his fight for the title of world heavyweight champion against Sonny Liston scheduled on 25 February 1964 to Miami. The victory against all odds of Ali brings a little more Gleason's in the legend. The "Gym" also inspires artistic directors and becomes a real movie set where hundreds of commercials or movie scenes will be shot, including Midnight Run and Raging Bull with Robert De Niro and Million Dollar Baby by Clint Eastwood, with Hilary Swank.

A new consecration arrives in 1974 when Bobby Gleason opens a second room in Manhattan on 30th Street, one of the most beautiful and modern clubs of the Big Apple. Gleason means excellence, the Panamanian genius Roberto Durán is training for one of the greatest achievements in the history of noble art in competition, the conquest of the title of world champion in 4 different categories. Mike Tyson will also make a passage there, like other big names in boxing. Bobby Gleason ended up selling the club in the early 1980s, now an institution that has been at 77 Front Street under the Brooklyn Bridge.

“Now, whoever has courage and a strong and collected spirit in his breast, let him come forward, lace on the gloves and put up his hands. (5.363-364)”