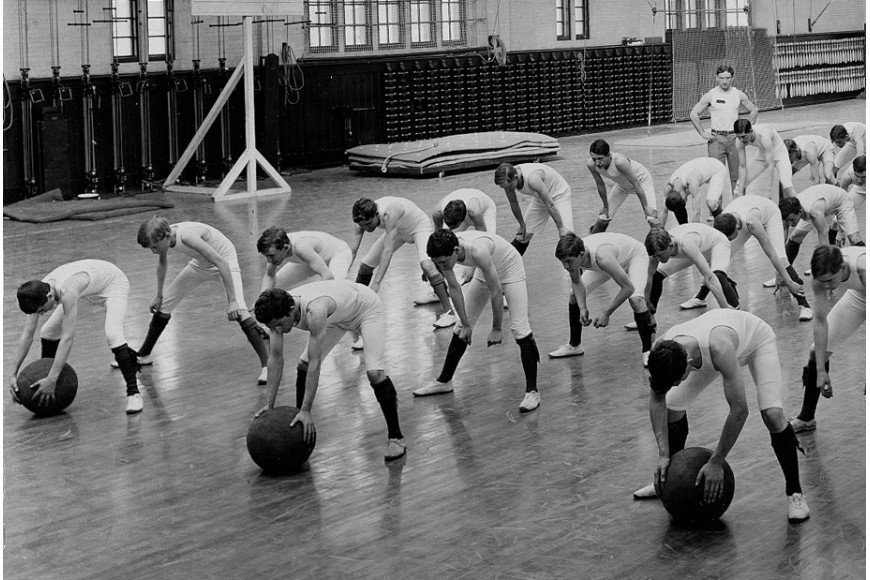 In this traditional period of new year wishes and good resolutions turned towards physical fitness after the excesses of the holidays and in view of the spring renewal, let’s take a historic leap to find a time when the sport knew a great revival of interest, when in the middle of the sixteenth century we revisited the ancient culture of gymnastics as a means of maintaining and maintaining health, with its emblematic accessory, the timeless "medicine ball".

Although we have recently rediscovered the work of the Spanish doctor Cristobal Mendez and his 1553 book El Libro del Ejercicio Corporal y Sus Provechos ("The book of physical exercises and its benefits") which describes gymnastics and games from a medical perspective, De Arte Gymnastica ("The art of gymnastics"), the first edition of which would have been published in 1569, is the first book of Western gymnastics to become famous, a veritable treatise on physiotherapy before the hour. It presents avant-garde research for the time on physical culture exercises practiced in the tradition of the Ancients. Its author is Girolamo Mercuriale a famous Italian doctor and philologist of the 16th century, passionate about ancient Greece and Rome who studied extensively in the Vatican archives the impact of sport on health. Extract (chapter III):

No one can therefore deny that, contrary to the opinion of Erasistratus and those who separate gymnastics and medicine, his knowledge interests every man who professes medicine, all the more that we find in Hippocrates, Plato and Galen l The assertion that has been made time and time again that if you want to lead a healthy life, you get so many benefits that there are so few that other medical resources hardly offer them.

Representation of athletes on a pottery from ancient Greece.

In its second edition, the texts are accompanied by numerous illustrated plates, probably from the imagination of Mercuriale and inspired by literature and ancient iconography such as mosaics, which greatly contributed to forging the representation of sport. of the time. From this work, Mercuriale produced the theory that the Ancients practiced gymnastics as an art, linked to music by rhythm. Gymnastics which takes its name from the Greek gymnasium, which designated the place of the city where the exercises linked to the body were taught and practiced. Nothing new today, since the advent of fitness appeared in the 1970s in the United States and then in France a decade later, the rhythmic sound is inseparable from the atmosphere of gyms like headphones that accompany group or solo training sessions.

A famous American bodybuilding trainer of Romanian origin once declared that frescoes of cavemen throwing a round rock would be discovered in the future. Symbol of the combination between art, through play (the ball) and science (medicine) medicine ball is this weighted round ball which practically dates from the dawn of humanity as we find traces of it too far that there have been athletes. Its principle is simple and is based on 2 elementary functions: sphericity and gravity. From antiquity to Hooverball in the 1930s, medicine ball has always been and remains today the basic instrument for the maintenance of physical vigor and the sporting discipline.