A nod to the history of sport is the day of the birth of Ferenc Puskás, the scorer of the famous "Hungarian Golden Eleven" of the 1950s, one of the greatest footballers of his era, the XV de France wins its first victory against its best-ever enemy, the "Perfide Albion", on a score of 3-0. It was not until the 18th confrontation between the 2 nations, after 17 defeats and a draw, to see the French defeat England in front of 35,000 spectators at the Olympic Stadium Yves-du-Manoir Colombes April 2, 1927. The winger Grenoble's Edmond Vellat scored the only points of the match by scoring a try in the first half, Adolphe Jauréguy, player of the Stade Français at that time, became the first captain of a victorious tricolor selection of the XV de la Rose. He will also be the first Frenchman to beat the 4 British nations.
It will then wait until 1951 for the first at Twickenham. The "Crunch" then becomes a definitely crucial meeting where France will compete with the inventors of rugby. 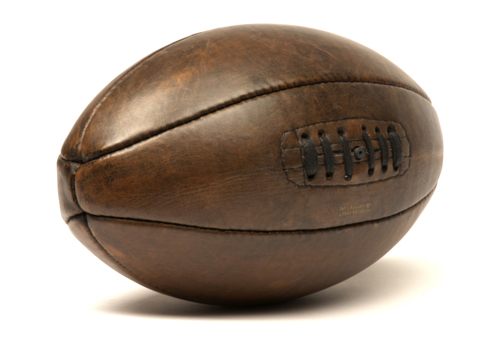 Reedition of the leather 4-panel rugby ball of the 1920s by John Woodbridge.