While football fans are this year exceptionally deprived of international competition with the postponement of Euro 2020, 70 years ago on the same date, the Football World Cup was in full swing in Brazil. It was the fourth edition in history and it still bore the name of Jules Rimet, its French founder then president of FIFA since 1921.

Awarded in 1947 and initially planned for 1949, this Brazilian Mundial, postponed for a year, the first of the post-war era, was one of renewal and celebration, organized in South America in a country already overflowing with passion for futebol who hosted the tournament for the first time thanks in part to Getulio Vargas, the very popular former and future president, the "father of the poor", who had planned to make the global event a means of developing the country economically means of education, culture and progress for the people. In just 2 years, the largest stadium in the world had come out of the ground in Rio for the occasion, the Maracanã, this oval vessel made by a collective of Brazilian architects, "modernized colosseum", then reached a capacity of close 200,000 seats. On Saturday June 24, 1950, the inaugural match was held between the locals, who were playing in white jerseys at the time, and Mexico, with a new football, also innovative and designed for the occasion, the "Superball Duplo-T ”.

Inauguration ceremony and opening match on 24/06/1950 at the Maracanã stadium.

On the evening of July 2, after the group stages - although the rest took place without knockout, which is an exception in the history of the competition - 4 teams qualified for the final group, which went determine the world champion nation. Host and favorite Brazil was solid in Group 1, almost flawless with 2 wins against Mexico 4-0 - including 2 goals by star Ademir - and Yugoslavia 2-0, Switzerland snatching the draw at the 88th at Pacaembu stadium in São Paulo.

In Pool 2, Spain recorded 6 points out of 6 with 3 victories against the United States (3-1), Chile (2-0) and England (1-0) which was the first participation in the World Cup. More disputed, group 3 qualified Sweden after its success against Italy, the title holder but amputated by 8 players from Torino FC - who had dominated Calcio for 4 seasons - tragically disappeared in the drama of Superga. Finally Uruguay, already twice victorious in the Jules Rimet Cup, had the advantage of playing only one game in their pool 4, Turkey and Scotland having withdrawn, ended by a spectacular 8 to 0 against Bolivia on July 2 in Belo Horizonte, a week after the start of the competition. Will this advantage of freshness weigh in the rest of the competition? The fact remains that Brazil, at home and carried by all the Carioca people, is more confident than ever as the first match of the final phase looms between Seleção and Sweden on July 9 at Maracanã. 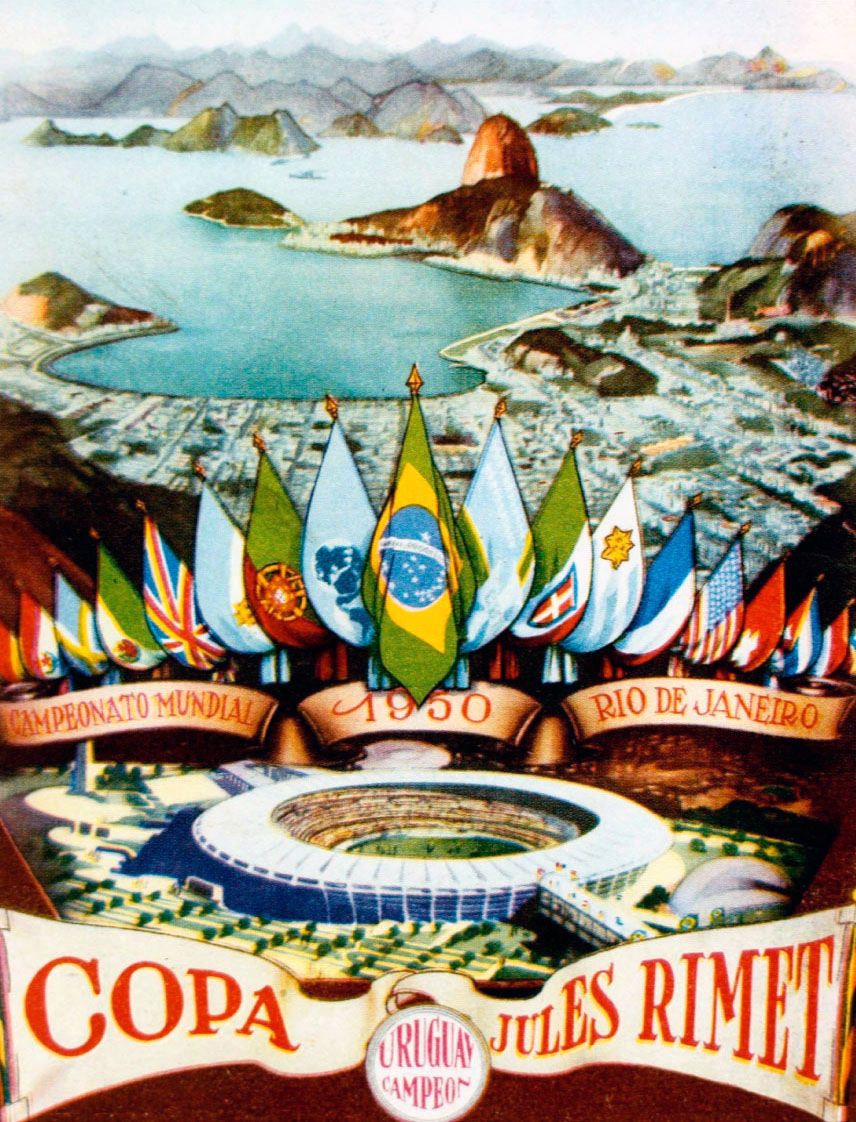 Souvenir postcard from the 1950s “Copa Jules Rimet” in Brazil.