Sports shoes are nowadays the subject of advanced technological research and real commercial battles on the part of the international giants of sports equipment. These firms are snapping up the biggest football champions to sponsor them with their latest models that are exposed to the sight of millions of viewers in the most prestigious games competitions. These "cleats" all have a common ancestor: the studded leather boot born in Europe at the beginning of the twentieth century.

Joseph William Foster, founder in England of a company that will become Reebok years later, is one of the pioneers who, in the late 1800s, made the very first spiked running shoes that will equip athletes at the Olympic Games. In 1923, the German Albert Messmer, then a young shoemaker, attended a football match in the pouring rain. The conditions make the pitch totally impractical, causing the players to fall and slide with each action. In front of this distressing spectacle, he imagines cleats under the sole of the leather football shoes which could allow the players to find their supports in the mud. This idea will revolutionize the world of sport on the Old Continent. In Eppendorf, in the suburbs of Hamburg, he and his brother Michael Ludwig Messmer founded Messmer & Co. Inspired by the traditional Hamburgian expression "Hummel Hummel !, Mors Mors! "He baptizes the firm" Hummel ", known today internationally as the" brand chevron "based in Denmark.

A few years later, at the end of the Second World War, Adidas will allow the Mannschaft, with its model of interchangeable cleats, to win the 1954 World Cup in Switzerland against the invincible Hungarian "Gold Eleven". Ferenc Puskás in the mud of the Wankdorf stadium. The famous "Miracle of Bern". 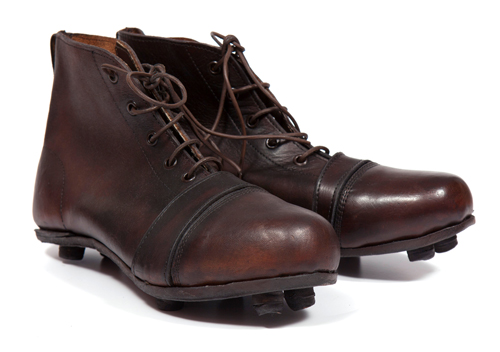