The Joe Louis Story is a biographical film by Robert Gordon released in the United States in 1953 a few months after the end of the career of Brown Bomber, legend of world boxing with 69 victories, world heavyweight champion from 1937 to 1949.

Joe Louis is on the screen interpreted by another boxer of the same category, a dozen years his junior: Coley Wallace. Tall, the native of Jacksonville, Florida has the distinction of being one of the few to have been able to boast of having defeated Rocky Marciano, in an amateur fight since the "Brockton Rock" is as any boxing fan knows remained undefeated in professionals. It was in 1948 during the New York Golden Gloves final. The dramatically-pitched film deals honestly with the social and human aspects of Louis' story, and his rise from the poor neighborhood of Black Bottom in Detroit to the heights of recognition glory, with all the difficulties of the time, that of America in the 1950s he had to face as a black boxer. 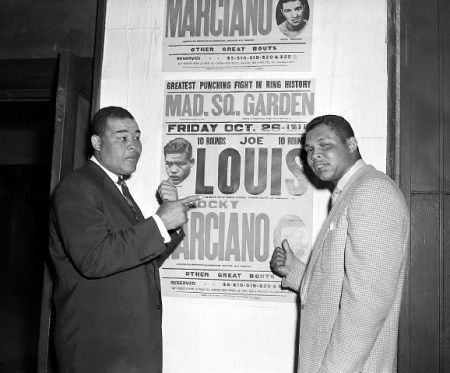 Joe Louis and Coley Wallace, their faces injured and swollen with makeup, during the filming of the film at Madison Square Garden for the re-enactment of the fight against Rocky Marciano of October 26, 1951.

The boxing scenes mix documentary and fiction with real images of the fights of Joe Louis and the performances of Wallace who seriously embodies the role of the champion of which he naturally has an almost similar appearance. The resemblance between the two boxers is also such that Coley Wallace will play Joe Louis for a second time in the cinema in Martin Scorcese's Raging Bull in 1980, in which the Brown Bomber falls under the blows of Rocky Marciano at Madison Square Garden during his second return to the rings in 1951, which marked the final end of his career.

In the end, it is a film without a large budget and somewhat confidential which at the time mainly targets a black audience and boxing enthusiasts but which remains as one of the first sports biopics in history, on the one who is considered a of the best - if not the greatest - boxers of all time.